Mesmerized: How Ben Franklin Solved a Mystery that Baffled All of France

Mesmerized: How Ben Franklin Solved a Mystery that Baffled All of France
Written by Mara Rockliff; Illustrated by Iacopo Bruno
Published by Candlewick Press, 2015
ISBN # 978-0-7636-6351-3

Hoping to convince King Louis XVI and Marie Antoinette to send troops to help American colonists fight against the British, the multitalented and popular Benjamin Franklin did not know he would soon be adding another title to his impressive resume–that of myth-buster. In Mesmerized: How Ben Franklin Solved a Mystery that Baffled All of France, author Mara Rockliff and illustrator Iacopo Bruno chronicle how Franklin debunked one of the biggest medical mysteries confounding the French monarchs. In 1778, waving a wand controlling an invisible force he called “animal magnetism,” Dr. Franz Mesmer convinced Parisians he could cure all their afflictions. How could so many eschew both the professional advice of medical doctors and sound reason for this magical cure-all? And how could so many claim that Dr. Mesmer’s wand indeed healed them? With her captivating text, Rockliff dramatizes how Mesmer was no match for Franklin, whose fierce employment of the scientific method not only exposed Mesmer as a fraud, but also led to the important medical discovery of the placebo effect. Bruno’s vibrant, Rococo-inspired illustrations reflect both the period’s lavish setting and Mesmer’s elaborate scheme. Text boxes highlighting Franklin’s applications of the scientific method—and expository back matter providing further information surrounding Franklin, Mesmer, and these events—add significant educational value to the book. After reading this amazing picturebook, your students, too, will most certainly be mesmerized (pun couldn’t be avoided).

The Versatile Benjamin Franklin. As Mara Rockliff explains, Ben Franklin played many different roles and pursued many different interests in this life. These include scientist, inventor, politician, firefighter, abolitionist, musician, among others. Divide students into small groups to research these diverse aspects of Ben Franklin’s life, using some of the books and websites listed in Further Explorations below. Have them use their research to write and act out a skit that showcases that role in Franklin’s life. Students may videotape their skits or perform them live before an audience of peers and families.

Ben Franklin and the Franklin Institute. Dedicated to one of America’s first and prominent scientists, the Franklin Institute in Philadelphia, Pennsylvania remains one of the oldest and premier science museums in the country. If your students are fortunate enough to live in fieldtrip proximity to the Institute, take them there! If not, have them explore the Institute’s virtual exhibits and online resources. As they explore the museum, encourage them to wonder what Ben Franklin’s interest in certain topics and questions of science were. If they visit the museum in person, have them ask museum guides and curators such questions, and share the answers with each other to round out students’ text-based understanding of the museum’s namesake. If they explore the museum online, have them compile their questions and email the Institute with them to see what kinds of answers they get.

Myths, Hoaxes, and the Scientific Method. Without the scientific method, Ben Franklin might not have been able to disprove Dr. Mesmer’s hoax. Have students brainstorm a list of possible hoaxes, or scientific myths, they would like to explore through the scientific method. Such phenomena might include whether the “5-second rule” about dropping food on the floor and eating it is valid, or whether dogs are really colorblind. You might also refer to the books listed below in Further Exploration for examples of scientific hoaxes and myths. Guide students through the scientific method to help them answer their questions, though some of the questions may not be answered and may raise further questions (to then study more closely in a focused science unit). Make sure they follow the same steps that Ben Franklin did!

Eponyms in Science. The English word mesmerize, which means to hold or transfix one’s attention, is derived from Dr. Mesmer’s name. Many other familiar English words are also variations of the names of famous people in science. Share a list of these words, such as pasteurize, kelvin, joule, amp, and braille, with students. Have them complete a K-W-L chart, brainstorming what they already know about those words and then filling in the rest of the chart to shape an inquiry into the people whose names inspired the words. In small groups, have students research the roots of these words, as well as the related scientists. Have them present their findings as a role play that re-enacts the events leading up to the coining of the new term.

Alternatives to Medical Treatment. Dr. Mesmer wasn’t the first, and he certainly isn’t the last to claim the effectiveness of alternatives to traditional medical care. Have students brainstorm and research some of these alternatives, such as hypnosis, herbal remedies, homeopathy, and acupuncture—some of which have been studied in scientific ways and others of which remain myths or unproven methods. Once students compile their findings, divide the class into teams to debate the effectiveness of these various alternatives with a panel of medical professionals. If you can’t invite or Skype with real medical professionals to participate in the debate, have a group of students role-play the medical panel.

Rococo Art and Design. Iacopo Bruno’s illustrations are as mesmerizing (pun intended again) as the historical events Mara Rockliff narrates. As an artistic movement and style, rococo also perfectly enhances the content of the text. Have students research what Rococo is, what its characteristics are, how it originated, what its goals and purposes are, and who some notable Rococo artists and designers were. Explore some of the museum websites listed below in Further Explorations to study examples of Rococo prints, furniture, and architecture. Have students create their own art and designs in rococo style, and then showcase those creations in a gallery for peers, families, and community members to enjoy.

Comparing Biographies for Kids. Since he is arguably the most influential and important figures in the American history, a number of biographies have been written about Benjamin Franklin for young readers. Gather a set of these biographies (see Further Explorations below for some examples) and share them with your students. Read each title to first compare how each author frames his or her view of Franklin. Next, reread the stories with a focus on writing style. What can you learn about writing biography from studying the authors’ writing choices? In each book, what events in Franklin’s life receives most emphasis? How does Mara Rockliff, in particular, use details to characterize Franklin? How are quotations used and documented? What kinds of information are provided in an author’s note? What is similar and different in terms of content across the biographies? Make sure to address any discrepancies that students notice, and to discuss them in terms of author’s perspective and the power of words on influencing a reader’s understanding as well.

Options for Treatment and Healthcare. Dr. Mesmer’s claims about the healing power of animal magnetism were most influential on members of the aristocracy, who could pay the exorbitant fees Mesmer charged. Though his treatment eventually proved to be a hoax, the option to receive such treatment was not something available to everyone. How does this reflect today’s options, availability, and costs around healthcare and medical treatment? Who gets the most number of options to choose from, and who doesn’t? How does it differ in various countries? Have students explore today’s issues around healthcare, and debate those issues in class.

Editors of YES Magazine (2009). Hoaxed!: Fakes and mistakes in the world of science. Kids Can Press.

Lawson, R. (1988). Ben and me: An astonishing life of Benjamin Franklin by his good mouse Amos. Little, Brown.

15 Titles to Help Students and Families With College Prep 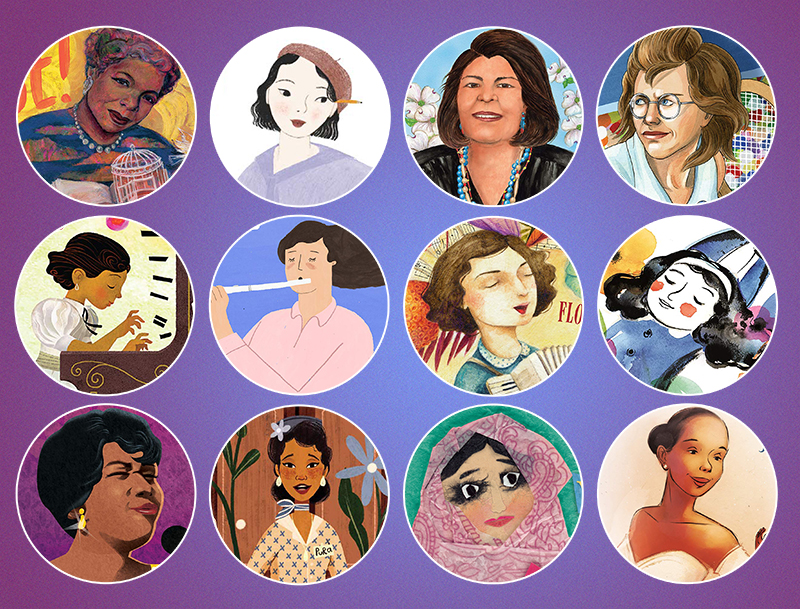 The Lives They Created. A Women's History Month Booklist