Underground: Finding the Light to Freedom 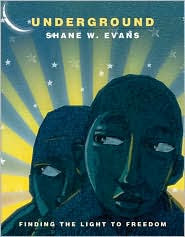 With these succinct opening statements, award winning illustrator Shane Evans provides an intimate portrait of a family’s nighttime flight from slavery in his new picture book, Underground. Each double-page spread offers a suspenseful snapshot of the family’s journey as they crawl, rest, and meet hardship, hope, and help along the Underground Railroad. By employing minimalist text and zooming his mixed-media illustrations in on the family’s faces, Evans’s work renders a powerful emotional impact on readers. And yet, what is left unsaid in his prose and hidden in the shadowy contours of his artwork are what appear most compelling. Teachers will find Underground a remarkable introduction to this significant piece of history, as well as one that can facilitate rich discussions about and insight into the successes and risks faced by those who braved the journey.

Slavery and the Making of America – a PBS series
http://www.pbs.org/wnet/slavery

Poems As Picture Books: Zetta Elliott Discusses the Upcoming A Song for Juneteenth

Be Afraid (but not too afraid) | The Year in SLJ Covers