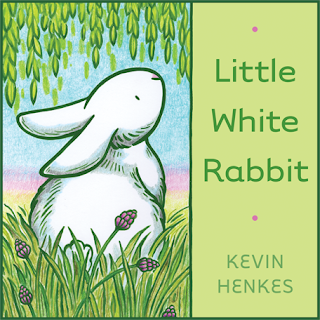 Written and Illustrated by Kevin Henkes
Greenwillow, 2011
ISBN:  978-0-06-200642-4
All Grades
Book Review
Perhaps Kevin Henkes’s greatest gift as an author and illustrator is the simultaneous depth and breadth of his work, his ability to vacillate in and out of the worldviews of preschoolers, seven-year-olds, and  preteens, to write a picture book of deceptive simplicity or a novel layered with possibilities. Like Kitten’s First Full Moon, Old Bear, A Good Day, and My Garden, Little White Rabbit features square trim, generous white space, and bold, thick outlines. Flipping through the pages, one is reminded of an actual flip book, as the rabbit bounces up and down in fluid movement, as if in a moving image, not trapped in print. Capturing the inherent curiosity of young children, Henkes allows readers to hop into Little White Rabbit’s imagination, as he ponders what it would like to be green, or a fir tree, or a rock. While our children are often bound by inflexible schedules, shorter recess times, and too much structured play, Henkes models the possibilities of roaming free and imagining yourself into whatever it is you want to be. Little White Rabbit’s imaginary journeys punctuate the text, and like Sendak’s Max in the midst of his wild rumpus, Little White Rabbit is, in those moments, fully immersed in color, the white space pushed off the page. The reader will be as well. Henkes’s trademark theme of home emerges at the end, when a scared rabbit returns to the safety of his mother. Henkes once said, “I tried rabbits for a while, but I found mice to be the most fun” (Kevin Henkes, 2002) . Maybe he’s changed his mind.
Reference:
Kevin Henkes. (2002). In Major Authors and Illustrators for Children and Young Adults. Gale.
Teaching Invitations
PreK-2
Grades 3-5
Grades 6-8
Further Explorations
Online Resources
Kevin Henkes’s Website: Little White Rabbit Page
http://www.kevinhenkes.com/little_white_rabbit.asp
Teaching Ideas for Little White Rabbit, Courtesy of Green Willow Books
http://www.kevinhenkes.com/Little%20White%20Rabbit%20activities.pdf
Pablo Picasso Biography, Essay, and Painting Thumbnails from the Metropolitan Museum of Art
http://www.metmuseum.org/toah/hd/pica/hd_pica.htm
Author Study Toolkit from Reading Rockets
http://www.readingrockets.org/books/authorstudy/chooseauthor
Kevin Henkes Acceptance Speech for the Boston Globe Horn Book Award for Old Bear
http://www.youtube.com/watch?v=gq9fLucUdF8
Books
For a list of all of Kevin Henkes’s works in print:
www.kevinhenkes.com
Sendak, M. (1963). Where the wild things are. New York: Harper.
Steig, W. (1969). Sylvester and the magic pebble. New York: Windmill.

The Flamingo: An Interview with Guojing About Her Latest, Loveliest Creation

And now there are 70 Heavy Medal Mock Newbery Suggestions

What if a Story Doesn’t End?: How My Eleven-Year-Old Character Changed My Mind about Traditional Narrative, a guest post by Louise Hawes

For Us by Us: 16 Poetry Collections and Books by Black Poets for Black History Month and Beyond